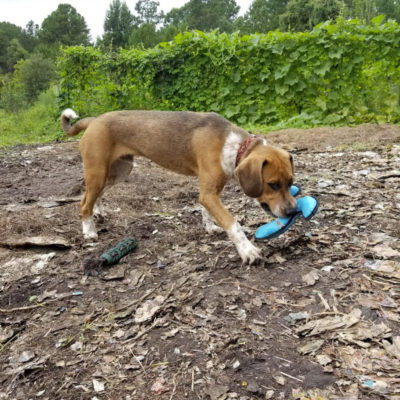 From communion wafers to doggie biscuits, or “Thou shalt not covet thy neighbor’s chew toy.”

My dog died July 4th, 2018. She was pretty good at keeping wildlife out of the orchards and gardens, and as her health steadily failed, the plums went to the raccoons, the apples were devoured by the possums, and a skunk family took residence under the shed. Shyami was an interesting pooch in that she was a loner and very territorial. She did not ever want a doggy buddy, and was sometimes aggressive to other dogs.

I adopted two other dogs from the county rescue on July 18th. They both had been picked up from the streets as strays, and there was no information as to their past history. The female was a prize. She was active and could stop in her tracks and come to full focus in a moment. I named her “Parijata,” which essentially means “rare flower.” I only got the male to give her the companion I thought she needed. Once Burfi stopped vomiting worm pieces and passing live spaghetti and got some energy back, he showed his nature.

Burfi became very aggressive to Parijata. Anything I gave her, even though he had the same thing, he attacked her for. It was an extreme case of possession aggression, and there was dog fight after dog fight. Over a couple of weeks, I was able to get it to where it was a more simple case of male dominance, but then he started attacking people. Violently.

A couple of days after I got Burfi, I realized that he had been a very well-known religious leader previously, and one who had been very implicated in unspeakable crimes against humanity. I thought it was amusing in a way that he was now a dog in my home, especially since I had been personally affected by his horrible activities many years before. But now that he had attacked two dear friends of mine, I put it to him. I told him that I could help him clear that aggression, it was his only chance. And he replied, “I want to keep it. It makes me feel good about myself.” So, it was back to county animal services for him. He could keep his aggression, and I was not going to keep him. I warned them at the county what he had done. We all have our free will, even in an animal body. He attacked a volunteer at animal services, and was quickly euthanized. When I first got Burfi from the county, he had been named “Chance.” He certainly had one.

Parijata is doing fine as the only dog on the property. And the resemblance of any name as mentioned in the title of this article to any particular person is simply a figment of your imagination.